Overview of banks in Switzerland

The Federal Financial Market Supervisory Authority, more commonly known as FINMA, regulates banks and bank accounts in Switzerland. UBS and Credit Suisse are the two largest banks in Switzerland, accounting for over 50% of total deposits in the country. The swiss banking system  includes:

According to Moody's , the Swiss banking system is stable thanks to good operating conditions despite the challenges of low interest rates and rising house prices facing the economy. 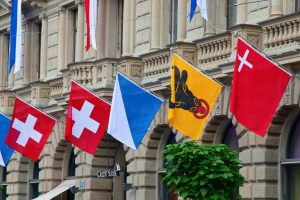 The main Swiss banks are:

UBS was founded in 1998 after the merger of the Union Bank of Switzerland, founded in 1862, and Swiss Bank Corporation, created in 1872. It is the largest bank in Switzerland, with seven main offices around the world.

Founded in 1856, Credit Suisse is one of Switzerland's leading banks and is headquartered in Zurich. The four divisions of the bank include:

Swiss Raiffeisen is a cooperative bank in Switzerland. It is the third largest bank in the country with 3.7 million customers, of which 1.9 million are cooperative members or co-owners of the bank. It consists of 292 Raiffeisen cooperatively structured banks and operates 1,004 branches throughout Switzerland.

Founded in 1870, the bank is the largest of the cantonal banks in Switzerland. Based in Zurich, it provides savings accounts, loans to central mortgage institutions, investment management services and professional finance advisory services to Swiss and German clients.

The Cantonal Bank of Zurich also offers international payments, letters of credit, document collection services, export finance and bank guarantees. It operates through a network of around 81 branches and 348 ATMs across the country.

Founded in 1890, Julius Baer is a private banking group and is present in 20 countries. Based in Zurich, the bank employs 6,205 people. It offers various structured products and services such as discretionary mandate, investment advice, Lombard financing, real estate financing and wealth planning. He is also engaged in securities, foreign exchange, precious metals trading and advisory services. It also operates an open platform of products and services.

As its name suggests, BCGE is a cantonal bank founded in 1861. The current form of the bank was created in 1994. Focused on small and medium-sized businesses, it offers mortgages, personal loans, accounts. savings, wealth and asset management services. , institutional real estate finance, advisory services, global commodity finance, and government finance and management.

Founded in 1841, Bank J. Safra Sarasin is a subsidiary of the Brazilian group Safra. The bank offers investment advice and asset management services to private and institutional clients. It entered its current state in 2013, when the Safra Group acquired Bank Sarasin & Co. Ltd and merged it with its subsidiary Bank Jacob Safra Switzerland.

Founded in 1995, EFG International is a subsidiary of EFG Bank European Financial Group. The bank offers private banking and asset management services and operates in 40 locations around the world. Based in Zurich, it currently employs 3,750 people.

EFG International's Private Banking and Wealth Management segment is managed on a regional basis and is divided into Continental Europe, Switzerland, Americas, UK and Asia. In 2016, the bank's total income was US $ 755.07 million, and the total assets were US $ 44,257 million.