Responsibility  - The shareholders' liability for the company is limited to the amount of their respective shareholdings.

Share capital  - Cypriot companies have generally authorized and issued a share capital of € 1,000. However, there is no minimum paid-up share capital requirement. It can be denominated in EUR or in any other currency. Bearer shares are not permitted.

Shareholders  - Public limited companies can be set up by a shareholder, who can be natural or legal persons, residents or non-residents, without limitation. The contact details of the shareholders are accessible to the public.

Administrators  - At least one director, who can be a natural person or a legal person, resident or non-resident. A shareholder can be the entrepreneur. The contact details of the directors are accessible to the public.

Secretary  - A secretary is required, who must be a natural person, resident or not, and will ensure compliance with legal and regulatory requirements.

Registered address  - Limited liability companies must have a registered office address located in Cyprus, where the company must keep all statutory registers and other documents which must be available for examination.

General assembly  - The company must hold an annual general meeting every year. No more than 15 months should elapse between one AGM and the next. The first AGM can take place within 18 months from the incorporation of the company.

Conformity  - Limited liability companies are required to include financial statements audited or certified by officially authorized auditors or accountants and a statement in the tax return. These requirements also apply to businesses without taxable income or to dormant businesses.

Public limited companies are required to submit an annual report to the Registrar of Companies each year.

Key figures of companies in Cyprus 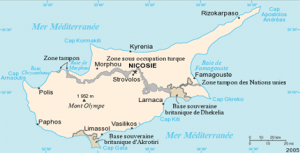 A country cut in two

Cyprus is an island state located in the eastern Mediterranean Sea, in the Levantine basin, south of Turkey and east of Greece. Although Cyprus is geographically closer to the West Asian region, the country is culturally and politically attached to Europe and is a member of the European Union.

The Cypriot Republic is a member of the United Nations (1960), the British Commonwealth, the European Union (2004), the WTO, the OSCE, the Non-Aligned Movement and the International Organization of Francophonie. Cyprus joined the euro zone on 1er January 2008.
Tourism is one of the main components of the economy and accounts for around 13 % of GDP.
Since 1974, the northern part of the island, located beyond the UN-controlled Green Line, has been under Turkish military occupation, and in 1983, this territory proclaimed itself "Turkish Republic of Northern Cyprus" without that it be recognized by the international community, with the exception of Turkey.

Of the total population estimated at 1,219,051 people in 2018, 864,200 people are counted in the part controlled by the Cypriot government (south). The remainder, ie 354,851 inhabitants, is partly Turkish occupied in the north of the island.
The Turkish military occupation of the north of the island is one of the major blocking factors for Turkey's entry into the European Union.