Share capital - There is no minimum declared capital requirement. Shares can be denominated in any currency except MUR. The shares can have a par value or no par value and must be fully paid up.

Shareholders - Authorized companies can be made up of at least one shareholder and a maximum of 25, which can be natural or legal persons and can be non-residents. Shareholder details are not being made public. The use of nominated shareholders is authorized.

Administrators - At least one administrator is required, who can be a natural person or a legal person. The contact details of the directors are not accessible to the public.

Secretary - The appointment of managers as a secretary is optional and can be a natural or legal person, resident or non-resident.

Registered address - Authorized companies must have a registered office in Mauritius, provided by an authorized registered agent.

Conformity - An authorized company is required to submit a tax return to the Mauritius Revenue Authority (MRA) within six (6) months of the end of its financial year.

Key figures of companies in Mauritius 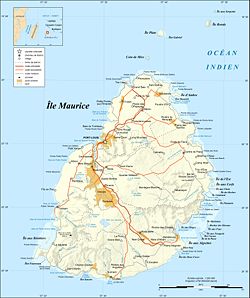 Stagnation of the population

Mauritius is a state in the Indian Ocean, located about 173 kilometers from Réunion, an island belonging to France, and 881 kilometers east of Madagascar. It is made up of Mauritius, Rodrigues (560 kilometers to the east), the Agalega Islands and the Saint-Brandon archipelago which are part of the Mascarene archipelago (with Reunion). Mauritius claims its sovereignty over the Chagos archipelago (United Kingdom) and the island of Tromelin (France).

After several difficult years for tourism, this essential sector for the country's economy is once again in good health. Other industries have developed widely, such as textiles or call centers, which have mushroomed in recent years (the country's multilingualism has something to do with it), but the global economic crisis has affected all communities. from the island.

The country has to reckon with increased competition from countries like neighboring India, China and Madagascar, where many Mauritian companies are increasingly outsourcing their basic production.
It must be said that the population density is very high, the highest in Africa, at 630 inhabitants / km2, and that the place is lacking more and more. The "Tiger of Africa" must renew its model and find new, more sustainable sources of development for its population.
Its population, in fact, is no longer growing. In recent years, growth has slowed down sharply, under the effect of emigration and the remoteness of the archipelago, but also and above all more and more because of accelerating aging. The fertility rate, at 1.4 children per woman, no longer makes it possible to renew the generations. In 2019, the population declined (-0.01 %) for the first time since independence.