Responsibility  - The liability of the partners of companies in Luxembourg is limited to their contributed capital.

Share capital  - The minimum capital of a Sarl is 12,500 euros. Upon incorporation, the capital must be fully paid up. Capital contributions can be made in cash or in kind. The company's capital is divided into registered shares. Each share has the same value and each share will have a minimum value of 24.79 EUR. The shares can only be transferred to non-shareholders with the agreement of the general meeting at which at least 75% of the company's capital must be represented.

Partners - A Sarl can be formed by two or more natural or legal persons, residents or non-residents, up to 100. The only document filed for registration is a Memorandum of Association which does not contain the names of the partners

Managers - At least 1 manager, who can be a natural or legal person, resident or non-resident, without restrictions.

General assembly  - Annual general meetings are compulsory for companies with more than 60 partners. Otherwise, they are not mandatory. The statutes will specify the rules for convening and conducting meetings. Meetings can take place anywhere.

Conformity  - Companies are required to keep accounting records and file financial reports with the RCS within seven months of the end of the financial year.

Companies with more than 60 partners must be subject to the compulsory supervision of at least one auditor designated in the articles of association.

Key Figures of Companies in Luxembourg 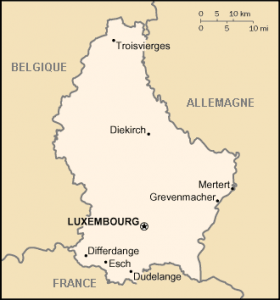 The Luxembourg is a country in Western Europe without access to the sea. It is, after Malta, the smallest of the Member States of the European Union. Located between Belgium to the west and north, Germany to the east and France to the south, Luxembourg measures 57 km from west to east, and 82 km from north to south.

From an administrative point of view, the territory is divided into twelve cantons and 105 communes (the three districts were abolished in 2015). The country has two natural regions: Eisleck in the north, or Oesling, which represents about a third of the territory, is a high plateau with an average altitude of 450 m, largely cut by rivers. It is part of the Ardennes massif. Gutland to the south, or Bon Pays, a hilly plain, has an average altitude of 250 m. A third of the territory is covered with forests, and half is used for agricultural and wine-growing purposes.
Luxembourg exceeded the symbolic number of 500,000 inhabitants a few years ago (2010), and its demographic growth remains very strong, at around +2 % per year. It exceeded 600,000 inhabitants at the start of 2018. 80 % of this growth is linked to immigration. Very open to the international market, the country is made up of 47.9 % foreigners (in 2018, the rate is constantly increasing).
It is one of the richest countries in the world. Generally considered a tax haven, a good part of the activity comes from the financial sector.