Responsibility - The liability of shareholders is limited to the amount of shares they hold.

The economic substance will be mainly evaluated according to the following criteria:

All BVI trading companies are required to provide information on an annual basis to enable the international BVI tax administration to assess whether a company is carrying out relevant activities and, if so, whether it meets the requirements for economic substance.

Relevant BVI companies incorporated on or before December 31, 2018 will have until June 30, 2019 to meet substance requirements.

An automatic exchange of information will be carried out with the relevant foreign competent authorities if it is found that an entity does not comply with the requirements of economic substance or carries out certain intellectual property activities or claims to be tax resident in a jurisdiction outside of BVI.

Additional penalties may apply if a company continues to fail to meet substance requirements, from a minimum of $ 10,000 to a maximum of $ 400,000 (high-risk intellectual property activity) or $ 200,000 (other activities)

Share capital - BVI companies are not required to indicate their authorized capital and do not have a minimum amount of shares. Usually authorized share capital is $ 50,000 and can be denominated in any currency. There is no statutory requirement for the capital to be fully or partially paid upon incorporation.

BVI companies can choose to indicate only the number of shares to be issued, but they do not have to determine the monetary value of their capital. Thus, the company can issue its shares at a “market value”, or at a value which depends on the capitalization requirements of the company.

The shares can be redeemable; do not confer any right, or preferential right, to distributions; grant special, limited or conditional rights, including voting rights; do not confer any voting rights; participate only in certain company assets; when issued or converted to one class or series, they may be converted to another class or series, as specified in the memorandum and articles of association. Shares can be with or without par value.

Subject to its memorandum and articles of association, a CB may issue fractions of shares and bearer shares. Government fees for companies that issue bearer shares are significantly higher and must be kept by an approved or authorized custodian.

Shareholders – The commercial companies can be formed by one or more shareholders, who can be natural or legal persons, residents or non-residents. Shareholder details are not being made public.

Administrators - At least one administrator is required, who can be a natural person or a legal person, resident or non-resident. The contact details of the directors are not accessible to the public.

Secretary - The appointment of a secretary is not required.

General assembly - Annual General Meetings are not compulsory, can be held anywhere and can be organized by telephone or other electronic means. Directors and shareholders can also vote by proxy.

Re-domiciliation - A foreign entity can be re-domiciled as BC BVI, and vice versa.

Conformity - Companies may be required to keep accounting records and underlying documentation for a period of 5 years, but their location can be freely determined. There is no obligation to file financial statements or annual report.

Key figures of companies in BVI 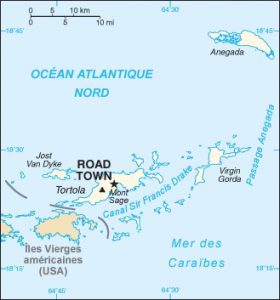 A paradise for dirty money and traffickers

The British Virgin Islands are an archipelago of the West Indies and an overseas territory of the United Kingdom. They include around fifty islands, 16 of which are inhabited. They are located east of the US Virgin Islands.

The territory is best known for its reception of tourists. Cruises are one of the main forms of tourism in the archipelago, with the reception of 700,000 cruise passengers in 2016. Hurricane Irma destroyed many infrastructures in 2017, greatly reducing tourism in the territory but also all the region.
Despite the global financial crisis that the world has known, which had above all affected tourism in the archipelago, one of the economic pillars, finance continued to do well despite everything. It was the first to get back on the water, taking advantage of the panic and the eagerness of governments around the world to give priority to the well-being of large financial groups before that of populations. The territory is currently home to about 950,000 "companies", against 447,801 in 2012, according to the government. Fishing is also an important part of the archipelago's economy.

But this corner of paradise is not just a fiscal one: trafficking of all kinds, in particular drugs, abounds in the archipelago. Indeed, taking advantage of the proximity of the Virgin Islands of the United States and Puerto Rico - which belong to the United States - the world's leading drug user - as well as the fact that most of the islands are not inhabited, traffickers make move their goods more easily.
A major threat, both for security on site and in the region, which is gradually coming under the control of violent mafia-type groups. This promotes corruption and sets back basic human rights in this magnificent territory.

All trading companies (BCs) are legally exempt from BVI taxes. However, these companies must pay an annual fee (see section C). In general, a CB cannot do business with persons resident in BVI or hold an interest in real estate located in BVI unless it obtains the appropriate business license from the BVI government. In addition, a beneficiary country cannot operate as a bank, trust company, insurance company or reinsurance company without a license from the BVI Financial Services Commission.

All employers not belonging to the Class 1 category are deemed to be Class 2 employers.

The first $ 10,000 of actual compensation paid to an employee, deemed employee, or self-employed person is tax-exempt.

BVI do not have foreign exchange control regulations.

Due to BVI's status as a British Overseas Territory, it is required to comply with the requirements of the European Union (EU) Savings Taxation Directive (the Directive). Banks and other BVI paying agents must exchange certain information regarding EU residents.

On March 24, 2014, the EU revised the directive to strengthen existing rules on the exchange of information on savings income. The main changes to the directive are as follows:

Although the UK's double taxation treaties with Japan and Switzerland have been extended to BVI, these treaties are not used in practice. BVI has not entered into any other tax treaty. However, the BVI has tax information exchange agreements with Canada, China, Japan and the United States and with 22 European countries including France, Germany, Ireland, the Netherlands and the United Kingdom.

On November 28, 2013, the BVI and the United Kingdom signed an Intergovernmental Agreement (IGA) to allow the exchange of information for tax purposes, including automatically.

The BVI government has indicated its intention to introduce a national compulsory health care system. The initial proposals indicated that such a system could be funded by a tax of 7.5%, split equally between resident employees and employers. It remains to be seen whether the proposal will be implemented in its current form.