Companies in the Netherlands

Company structure in the Netherlands

Responsibility  - The liability of shareholders is limited to the amount of their shares.

Share capital  - BV do not require a minimum share capital (only a nominal deposit of € 0.01). The company's equity is divided into shares, which are not freely transferable and are registered privately.

Shareholders - A BV can be formed by one or more natural or legal persons, residents or non-residents. Shareholder details are made public.

Administrators - A BV must have at least one administrator. Tax substance rules require that at least 50% of the board be composed of directors who are residents of the Netherlands for tax purposes.

Registered address  - A company must have a registered office in the Netherlands.

General assembly  - A BV is required to hold an annual meeting of shareholders to vote on certain points, such as the appointment of directors and the adoption of the annual accounts. The AGM can take place outside the Netherlands.

Re-domiciliation  - Incoming / outgoing redomiciliation is generally not allowed. An exemption applies to Societas Europeae (European limited liability companies) which, in certain cases, may change their registered office to the Netherlands.

Conformity  - A BV must draw up and file its annual reports and accounts with the Chamber of Commerce and file an income statement each year with the tax and customs administration (Belastingdienst).

Medium-sized and large companies are required to have their annual report verified by independent, qualified and registered Dutch auditors, if 2 of the following 3 criteria are met by the company for 2 consecutive years: total assets greater than 4.4 million d 'euros; turnover exceeding 8.8 million euros; a workforce of more than 50 employees.

Key figures of companies in the Netherlands 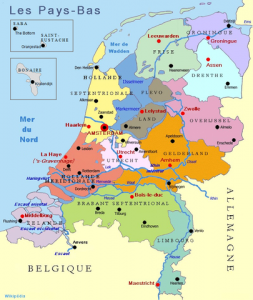 A flat country very open to the world

The Netherlands are a western European state bordered by the North Sea, Belgium to the south and Germany to the east. It is a constitutional monarchy.
The country is very open to the international market. Its geographical position, at the heart of the European “Blue Banana”, makes it a central point, in particular for the transport of goods. Rotterdam, even if it is no longer the world's leading port due to the very strong growth of Chinese ports, remains the most important in all of Europe.

The country's infrastructure is among the most developed in the world, in all areas. However, its geography makes life difficult: 96 % of land is flat, and 25 % of land is below sea level!
It took the Dutch centuries of practice to fully master the formation of polders, those immense agricultural areas which lie just one sea level, notably by creating a large inland sea protected from the North Sea by gigantic dykes. The work, which still continues in some places, is titanic!

The Netherlands receives every year a large contingent of foreign tourists, attracted by the beauties of the city of Amsterdam, renowned for its architecture, and also for its internationally recognized freedom of expression. Many foreigners live in this country with free morals.

Corporate Taxation in the Netherlands