Legal basis - Although the UAE legal code is based on Sharia law and civil law, Ras Al Khaimah International Business Center is based on common law principles.

Responsibility - The liability of a shareholder towards the company is limited to any unpaid amount on a share held by the shareholder.

Trade restrictions - International companies may not do business with persons in the free zone, engage in any other activity which may, by regulations made by the Authority be prohibited by the Authority, carry on banking activities in the UAE or in the zone ; or operate as an insurance or reinsurance company, insurance agent or insurance broker in UAE or the free zone.

International companies may establish or maintain professional contacts with legal consultants, accountants, management companies or other similar persons operating in the free trade area; keep books and records in the free trade area, keep within the framework of the meetings of the UAE free trade area of its directors or members; hold a bank account in the RAK Free Trade Zone for the purpose of carrying out its day-to-day operational transactions; or hold assets in the zones of the free zone designated by the Authority.

A company can issue shares with and without par value. A share of par value can be issued in any currency. The issue of fractional shares is also authorized. The company can issue free shares, partially paid-up shares or void shares. Bearer shares are not permitted.

Shareholders - The company can be formed by at least 1 shareholder, who can be an individual or a company, and can be non-resident. Contact details of shareholders are not disclosed in a public file.

Administrators - At least one director is required, who can be a natural person or a legal person, and can be non-resident. Details of directors are not being released on a public record.

Secretary - The appointment of a secretary is required, who can be a legal or natural person and can be non-resident.

General assembly - Annual general meetings are not compulsory and can be held anywhere. Meetings can be held by telephone or other electronic means; directors and shareholders can also vote by proxy.

Re-domiciliation - A foreign entity can continue as a RAK ICC, and vice versa.

Conformity - International companies must prepare annual accounts, but there is no obligation to file them, nor annual declaration, nor taxa declaration, to any authority. Audits are not required except for liquidation.

International companies are subject to an annual government tax.

Ras Al Khaimah, one of the seven members of the United Arab Emirates, is developing quietly, far from the excess of “bubbles”. One hour by highway from Dubai, the emirate is attracting growing interest from foreign companies.

Ras al Khaïmah is the fourth largest emirate in the country.
It is part of what is called the Northern Emirates.
Name of the leader (current emir): Sheikh Saud bin Saqr al Qasimi (since October 2010)

The previous emir, Sheikh Saqr bin Mohammed al Qasimi, died in October 2010 at the age of 90. He had ruled the emirate since 1948, well before the creation of the United Arab Emirates.
Number of inhabitants : Around 200,000
Located in the northern region of the United Arab Emirates, Ras Al Khaimah is emerging as a popular city with expats, due to its rapid economic development. Many foreigners settle in this small emirate. Strategically located near the main roads connecting the other emirates and only 45 minutes drive from Dubai International Airport, Ras Al Khaimah also has its own international airport.
Ras Al Khaimah had around 300,000 inhabitants in 2019 according to the government of United Arab Emirates. The number of visitors is also increasing, and tourism is its most important economic sector.
According to Salary Explorer, the average salary is around 14,600 AED per month. The lowest being 1970 AED and the highest being 64 600 AED. 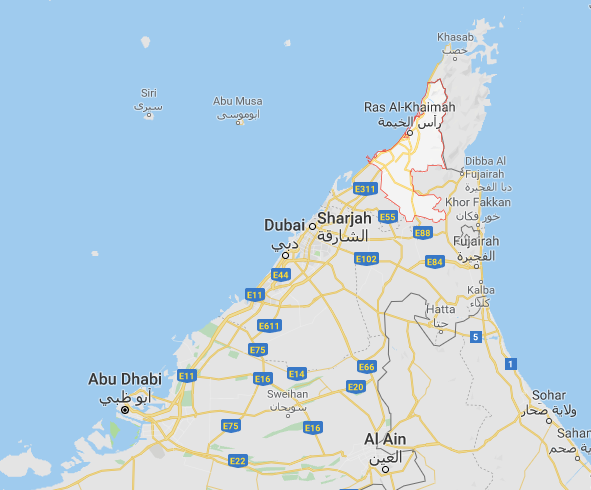 Ras al Khaimah has seen an increase in tourism, particularly from Germany, Russia, UK and India. In this sense, the emirate is increasingly establishing itself as a destination for leisure and adventure. It should be noted that agriculture and fishing also contribute significantly to the local economy. Finally, the production of building materials (for export), manufacturing, high technology, real estate, insurance and banking services are key sectors, generating jobs.

The development of the free zone has also taken off in recent years, promoting job creation in the region. This is mainly due to the country's economic growth and the tax benefits it offers.

When talking about the Emirate of Ras Al-Khaimah in the United Arab Emirates, it should be noted that it is not as famous as neighboring Dubai and Abu Dhabi, but certainly no less attractive to international companies and investors. potential foreigners. This is due to a favorable geographical location, which gives access to the markets of the Middle East, India, Africa and other regions.

The economy of Ras Al-Khaimah is growing rapidly due to industries such as manufacturing, financial services sector, construction, real estate, and tourism industry. The investment climate of the emirate is recognized by international experts as the most favorable. Thus, according to the international publication FDI Magazine, Ras Al-Khaimah has been recognized as the best place for foreign direct investment.

Ras Al-Khaimah's law excludes concepts such as corporate taxes, income taxes, value added taxes, dividend and capital gains taxes. The registration of companies in specialized economic zones allows a participation of 100% of foreign nationals as shareholders and owners of the company. There are no restrictions on the repatriation of capital, as well as exchange controls, quotas and trade barriers. If we compare the tax jurisdiction of Ras Al-Khaimah with other similar tax havens, it is possible to identify some differences. UAE has its own specificities, taxes have never been applied here. These are the main differences in attitude towards business in the UAE. Government budgetary revenues come mainly from products of the oil and gas sector and other sources, but not at the expense of corporate taxation.

The oil and gas sector has enabled rapid development of the economy, simultaneously developing other economic sectors, especially international trade and tourism. Nowadays, the investment climate in Ras Al-Khaimah attracts considerable foreign investment in the local economy and is the main driver of it. In fact, UAE tax laws and regulations are of a recommendatory nature except for the banking, oil and gas industries. In addition, state recommendations on tax planning are not applied to special economic zones. In particular, unique business opportunities are open to companies incorporated in the Ras Al-Khaimah Specialized Economic Zone.

Ras Al-Khaimah Free Trade Zone - is a government project designed to provide a favorable investment climate for foreign businessmen. The procedure for incorporating a company in the territory of a specialized area is simple. Both offshore and onshore companies can integrate into it, which is useful for building profitable business projects.

The main advantage of integration into the economic free trade zone is a complete exemption from tax payments in the event of foreign participation in 100%.

It is worth mentioning a relatively low threshold for import duties and its complete absence for most product groups. Local currency - The dirham is pegged to the dollar and is freely convertible into any other currency.

The benefits of tax planning in this region are available not only to business representatives and foreign investors. A fair and liberal tax policy also applies to businesses and individuals. Thus, the tax policy excludes personal income tax and makes the emirate attractive to foreign professionals and skilled workers.

It should be taken into account that the direct tax system is in contradiction with the traditional tax policy of the UAE. Despite the federal form of the country, here you will not find federal taxation here.

In addition to the benefits already mentioned, foreign nationals can acquire ownership of real estate in Ras Al-Khaimah, which is also tax exempt.

The emirate of Ras Al-Khaimah is increasingly seen by foreign businessmen as the opportunity for effective tax planning. The UAE government has a number of international agreements ratified to avoid double taxation, which significantly reduces tax payments in relevant jurisdictions.

Offshore companies incorporated in the RAK Free Trade Area have the following advantages:

Jurisdiction of Ras Al-Khaimah at the international level

Internationally, the RAK has acquired a solid reputation as a transparent and tax-free jurisdiction. It is important to note that the legal practice of the emirate excludes illegal schemes and the possibilities of “money laundering”.