Responsibility  - The shareholders' liability for the company is limited to the amount of their contributed capital.

Members - A Bulgarian company can be formed by one or more natural or legal persons, residents or non-residents. Membership details are made public.

Manager - A company must have at least one manager, who must be an individual, resident or non-resident.

Secretary  - Bulgarian companies can appoint a secretary, but this is not compulsory.

Registered address  - A company must have a registered office in Bulgaria.

SMEs are not required to appoint an auditor and file audited accounts.

All Bulgarian companies are required to file an annual income tax return and pay their corporate taxes until June 30.

Key figures of companies in Estonia 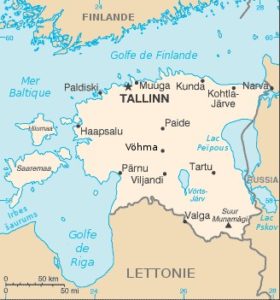 TheEstonia is a country in northern Europe and a member state of the European Union, located on the eastern shore of the Baltic Sea and southern shore of the Gulf of Finland. The country is bordered to the north by the Gulf of Finland, to the west by Sweden, to the south by Latvia and to the east by Russia. This country is generally grouped together with Latvia and Lithuania in a geopolitical group called the Baltic States.

After a decade of strong economic growth at the beginning of the century, which had enabled Estonia to quickly catch up with the standard of living of the European Union, the global crisis has slowed down the country's development and unemployment has risen sharply. In recent years, the economy has stagnated or has grown in a much more measured way and unemployment has fallen to around 7 % (2e quarter 2017).
The entry of Estonia into the Euro, the European currency, in January 2011, led the government to pursue an austerity policy, which resulted in even more precariousness and poverty among the most vulnerable populations. more fragile. VAT, an unequal tax in essence, was for example increased from 18 to 20 % in 2009, allowances were lowered, and various taxes increased.

However, the country is not lacking in assets. New technologies are very present in the everyday life of Estonians. The country aims to offer complete wifi coverage, for example. Some companies have created world famous software here, like Kazaa, Skype. The opening of the country has also allowed tourism to develop very strongly.
In another register, Estonia is covered to 50 % of forests, thus supporting an efficient wood industry. It also does a lot of trade with its neighbors, in particular Sweden and Finland.
The fact remains that the small size of its population, 1.3 million inhabitants, up very slightly (+0.27 % in 2017 after a decrease of -0.02 % in 2016) does not allow it to count on a substantial domestic consumer market. Many young people move to the rest of the European Union in order to find work and a better life, accentuating the phenomenon of population aging and the fall in the birth rate.